A Trip to the 'Tips

For the second straight week, the T-birds will begin the weekend with an important match up against the Everett Silvertips. Seattle travels up to Comcast Arena Friday night with 8th place in the Western Conference on the line.

The question isn't just who will be occupying 8th place when the game is over, but also who will be occupying the 8th spot when the game begins. Seattle currently holds down that position, despite having dropped two straight to Tri-City after their emotional home ice win over the Silvertips last Saturday. But Everett is home tonight (Wednesday) against Kamloops and if they earn a point they pull into a virtual tie with Seattle and if they pick up a win they will leap frog the T-birds.

In the eight plus seasons Everett has been in the league, these two rivals have never met in the postseason, and certainly won't this year. But considering what is at stake, these four head-to-head games in the final month are certainly having a playoff vibe to them.

Meanwhile, both The T-birds and Silvertips are still within striking distance of the 7th place Victoria Royals who, like the T-birds, are just 3-7 in their last ten games. The Royals lost at home last night to Spokane and host the Chiefs again tonight. They Royals also host the Vancouver Giants twice this weekend before traveling to Everett next Wednesday.

Meanwhile, the Prince George Cougars are just four points back of a playoff spot after their loss at home last night to Medicine Hat. The Cougars are in the midst of a long home stand that has them facing the Tigers again tonight and hosting Spokane twice this weekend before they welcome the T-birds to town for a pair next Tuesday and Wednesday.

As for last night's 3-1 loss in Kennewick to Tri-City? 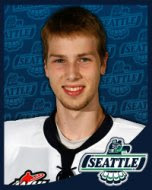 I have no complaints about the effort. They could have easily wilted after the Americans broke on top, 3-0, after the first period, but they didn't. They kept battling and goaltender Daniel Cotton settled down and blanked the Ams the rest of the way. But the T-birds didn't do enough with their five power play chances, they didn't create enough scoring opportunities and when they did they didn't finish those chances.

Here's the update Pace to the Playoff standings: