No Game of Horseshoes

What's the adage? Closeness only counts in horseshoes and hand grenades? The T-birrds found that out the hard way this weekend. 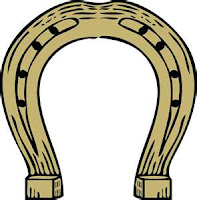 It's got to be tough to play the top two teams in the league on back to back nights, match them shot for shot, hit for hit and stride for stride and still at the end of the day not earn a single point. That's what the T-birds did though in losses Friday in Kennewick to the U.S. Division leading Tri-City Americans and Saturday at home to the WHL leading Kamloops Blazers. Both games were there for the taking but Seattle just couldn't finish enough chances and in the end its two more heart breaking close losses. That now makes it 9 of the last 11 games essentially decided by one goal and the T-birds record in those games is 2-7.

Not to discredit the solid play of the opposition (Tri and Kamloops are at the top of the league standings for a reason), but in both cases I thought the 'Birds did more beating of themselves then losing to the opponent. That was especially true Saturday night against the Blazers. Too many scoring opportunities left on the door step to die, particularly in the first period, 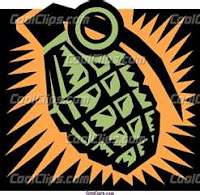 and then one egregious defensive zone turnover that ended up in the back of the T-birds net late in the second period. It also ended up as the game winning goal.

Hard to believe that just a year ago Seattle and Kamloops ended up tied for last place in the Western Conference, both with just 64 points and a .444 winning percentage. A year later the T-birds are still struggling to avoid the conference basement while the Blazers are the top spot in the league. reality is I thought Kamloops would be a better team then they ended up being last season but their defense and goaltending let them down. They always had the offense. Turns out I was just a year off in my prediction.

I bring that up because I think Seattle could be on the same path. I think the team has turned a corner late in this season. In my estimation, their play over the past two games is not an aberration, but rather a sign of things to come. I'm not saying they will do next season what the Blazers have done this year and vault from the bottom to the top of the conference, but I do see the chance to finish strong over the final month plus of this year and springboard that into a good 2012-13.

I'm reminded of something assistant coach Darren Rumble told me the first time I talked to him back in the first week of the season. We were discussing the team he coached for last season in the QMJHL, the now defunct Lewiston MAINEiacs

and how they started out very slow under a new coaching regime but came on like gangbusters late and made it all the way to their confence finals. Rumble wasn't making a prediction and certainly wasn't saying the T-birds were going to make it to the conference finals. What he was saying is that they could be playing their best hockey at seasons end. Sometimes, when you make big changes, it just takes longer to get young players completely on board with what you are tying to accomplish with those changes.

One player who is on board is Conner Honey. 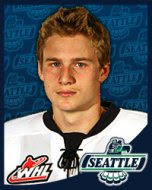 He had a tremendous weekend and was probably the best T-bird on the ice both games. Twice he just about undressed a couple of Kamloops players with his stick handling. He never quits on the puck at either end of the ice and his energy level is something his teammates should feed off. The line combination of Honey, Branden Troock and Brendan Rouse is setting the pace. I said it earlier but sometimes you don't know what you've got until its gone and this team suffered when Rouse missed a month due to injury. 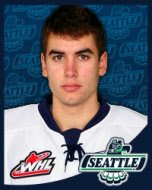 His return to the ice is a big reason the team has found more game-to-game consistency.

Despite the good play this weekend, the Thunderbirds are still in a fight for their playoff lives. Playing well enough....just to lose, is not good enough. They have to start getting points. And they're going to have to do it against quality opponents. Of their remaining 21 games, 15 will be against teams with winning records. They'll also have to beat the teams chasing them from behind. Seattle has four left with Everett and two against Prince George.
Posted by In The Corners at 12:25 PM