For a team that ended its season a month and a half ago, the Thunderbirds have been awfully busy lately.  It goes back to winning the draft lottery in late March, then choosing Matthew Barzal with the #1 overall pick last week along with making nine other selections.  Then came the news Tuesday that the T-birds had acquired 20 year old goalie Brandon Glover in a trade with Calgary, sending a third round bantam pick in next year's draft to the Hitmen.

The wheeling and dealing didn't stop there though.  Wednesday the 'Birds sent 19 year old Jacob Doty to Medicine Hat in exchange for 17 year old left winger Riley Sheen.  Doty, the Billings, Montana native, was a crowd favorite at the ShoWare Center for his willingness to drop the gloves and stick up for his teammates. 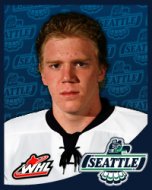 The team press release seemed to indicate Doty may have requested a trade, or it might have been a mutual parting of the ways.  I think the reality is Doty probably saw the writing on the wall.  Jacob was healthy all of last season, but far too often that meant he was a healthy scratch.  That's not a good sign for an 18 year old and it was probably a situation that wasn't going to change much if he remained with the club as a 19 year old.

The one thing Medicine Hat will get in Jacob is a hard worker who wants to improve his game. Doty never gave less then 100 percent with Seattle.  He worked hard last offseason to improve his skating, going so far as to spend his summer in Minnesota where he could find more ice time then he could in Billings.  The problem is, for all the hard work, the skating never got dramatically better.

This move has the Steve Konowalchuk stamp all over it.  Coach K puts a premium on skating.  From all indications Sheen has good skating speed. He's much smaller then Doty but probably has a higher offensive ceiling and the T-birds need to find ways to generate more offense.  This goes back to something I blogged earlier this spring; Konowalchuk need to be able to get his type of players to fit into his system.  Doty just wasn't a fit.  We'll see if Sheen is a fit.

This move certainly makes the group of forwards younger...getting almost as young as the group of defensemen.   It will be interesting to see how this sways the team's thinking when it comes to filling the last two 20 year old roster spots.  At the very least I think we will see the T-birds try to acquire an 18 or 19 year old high-scoring forward type in the CHL Import Draft in late June.
Posted by In The Corners at 10:40 PM No comments:

Seattle gets some clarity in the goaltending situation...or did they?  GM Russ Farwell sends a 2013 third round Bantam Pick to Calgary in exchange for 20 year old goalie Brandon Glover.  Glover has never been the outright #1 goalie in his WHL career (split between Calgary and Moose Jaw), but when he has played he's put up decent numbers.  He also put up very good numbers in the 2012 playoffs for the Hitmen.

I actually recall a game a few years ago when Glover (great name for a goalie by the way!) was a with Moose Jaw and played very well against the T-birds at the Crushed Can.  At the time I thought he was going to be the future in net for the Warriors.  Not sure why that didn' work out but let's hope it works out well with the 'Birds.

You don't give up a 3rd round pick for a 20 year old netminder to be anything but the #1 guy.  The question now becomes who backs up Glover?  Daniel Cotton spent all of last season as the back-up to Calvin Pickard.  He saw limited playing time but is still relatively young, heading into his 18 year old season.  Seattle recently signed Danny Mumaugh, a 16 year old out of Colorado and indications seemed to be he is expected to be with the team next year.

Justin Myles was a 5th round bantam selection two years ago who had a solid camp last fall.  Does he still figure in the team's plans?  What about Nolan Kruizenga who was drafted in the spring of 2011 or Brad Regabliati was was listed last year by the club?

Meanwhile the T-birds expended a 3rd round pick earlier this month on Logan Flodell.  While he won't be with the team this coming season, he will be at camp this August.  Could there be seven goalies at camp?

Right now the odds seem to favor a Glover/Mumaugh combo but don't be surprised if the team carries three goalies through the first week or so of the regular season.  The good news is that with the trade for Glover Seattle has a veteran netminder who's been through the WHL wars to step in for Pickard.
Posted by In The Corners at 9:26 PM No comments:

Well, it's that time of year again.  Time to try and make heads or tails of the bantam draft.  This year's draft may have garnered a bit more interest from Seattle fans after the Thunderbirds won the draft lottery in late March and gained the first overall pick for the first time in franchise history.

The concensus throughout the winter and early spring was that Matt Barzal of Coquitlam,B.C.  and the Burnaby Winter Club, was the top choice available for selection and that's where T-birds GM Russ Farwell went with the pick.  He certainly put up some big numbers this past season and has been lauded throughout his hockey development for his skill and leadership.  He might be a once-every-four-or-five years type of talent.   I've read in a number of different places where he is compared to Ryan Nugent-Hopkins, if not in style then in potential.

If you haven't had a chance, you should go to the T-birds facebook page and look at the scouting video they posted of Barzal.   The young man has an almost effortless way of playing the game.  He doesn't waste any energy.  He is a smooth skater and he always seems to be at the center of the action.  It really does appear as if he's thinking one step ahead of everyone else on the ice.

As a result Barzal plays like he's bigger and older then the other players he's on the ice with.  But the reality is he's not.  Those other players are the same age (14 to 15 yrs old) and, for the most part, the same size (around 5'7" to 6'0").  The separation in his skill set makes him appear to be a more mature player.  This is why some have suggested he could play in the WHL as a 15 year old and not seem out of place.  This is why Farwell says Barzal will be a top six forward for the Thunderbirds as a 16 year rookie in 2013-14.

The T-birds, of course, had three picks in the top 25 in the draft.  Barzal at the top was a no-brainer.  With their second first round pick (20th overall) obtained from Portland in the Marcel Noebels deal, Seattle selected rigth winger Keegan Kolesar out of Winnipeg.  With their second round choice, 25th overall, the 'Birds went with defenseman Ethan Bear from Saskatchewan.


Kolesar is 6'0", 208 lbs.  Bear is 5'11"+ and 198  lbs. That's a pair of sturdy 15 year olds.  Look, I don't know how much stock to put into the scouting services that rank these players.  Those scouts do a lot of grunt work though and they put a lot of time and effort into compiling their lists so I'll give them the benefit of the doubt.  I have seen those scouting services list each of the T-birds top three picks as first round talents.

Seattle's third round selection was goalie Logan Flodell out of Regina.  His numbers from this past season aren't eye-popping but I've read that he didn't play on the most talented team.  Before this past season he was expected to be one of the top bantam goalies in his province so he does come with some expectations that he can play at the WHL level.  I believe this is the highest pick the T-birds have used on a goaltender since choosing Calvin Pickard in the second round of the 2007 draft (38th overall).  None of those lower drafted netminders has yet to play a regular season game for the T-birds. Maybe it was time to draft a goalie with a higher pick.

In the fifth round the T-birds went back to Saskatchewan to draft center Lane Pederson.  With no picks in the 6th or 7th round Seattle made two 8th round selections;  Grenfells, Saskatchewan LW Donovan Neuls and 6'2" Stillwater, Minnesota defenseman Luke Osterman.  Shades of Kevin Wolf?

Neuls' teammate from Saskatchewan, Tyler Kreklewich (he and Neuls both played for the Melville Millionaires) was selected in the 9th round.  This is interesting because Tri-City has had a lot of success the last five years by grabbing players who grew up together or played together in their youth.  The Thunderbirds closed out the draft with two 10th round selections, a pair of  defensemen; Austin Wong from Medicine Hat and Zak Galafanakis....no, wait that's the guy from the "Hangover" movies.....I mean Zak Galambos who has been playing in Detroit but is from Walnut Creek, California (think the Bay Area, just north and east of Oakland).

Again, according to at least one scouting service Galambos was the 6th best U.S. prospect available in the draft and rated as a 4th round talent which is good 'cause the T-birds didn't have a 4th round pick.

Now usually it's fun to follow the draft but when it's over you know there won't be any immediate impact from these players for at least two years.  Heck, some may never be heard from again after rookie camp in August.  The Barzal pick though, makes this draft a little different.  I would greatly anticipate him being up with the team for a game or two around the holidays and then again sometime next spring, hopefully for a round or two of the playoffs.
Posted by In The Corners at 7:10 PM No comments: