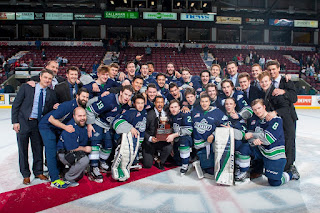 After watching the Brandon Wheat Kings celebrate a WHL title on the ShoWare Center ice last May, on a Friday the 13th no less, the Seattle Thunderbirds had one goal in mind this season, get back to the WHL Final. Get one more crack at the Chynoweth Cup with this core group.

It wasn't easy.  Over the past seven months T-birds players have missed nearly 300 man games due to injury, illness, the NHL or international tournaments.  Injuries were the biggest adversary, taking some of Seattle's best players out of the lineup for extended periods of time.  But 12 months and 92 games later (six preseason, 72 regular season and 14 playoff games versus the Western Conference) this club has persevered, overcome all those obstacles and here they are back in the WHL Final after disposing of the Kelowna Rockets Sunday evening up at Prospera Place.

As Head Coach Steve Konowalchuk said prior to Game 6, this was a series of depth players as both teams dealt with key injuries.  In the end Seattle's depth shined just a little brighter.

A season ago in the league championship series, they faced the Wheat Kings, who were the CHL's 2015-16 number one ranked team preseason. This time around?  They get the current CHL top ranked club, the Regina Pats.  Seattle's response?  You want to be the best, you have to beat the best.  Bring 'em on.

This recent six game series with Kelowna should serve as a great preparation for the Final.  Despite going one game short of a full best-of-seven, this match up with the Rockets was a battle.  Kelowna, a team with seven current NHL prospects and probably 4 or 5 future NHL draft picks, was physical, they were at times relentless.  At times in the series the Rockets came at Seattle in waves, a team of highly skilled, well coached, smart hockey players.  Kelowna used their speed to challenge Seattle.  They made the T-birds play at their best to win this series.

By the time Game 6 rolled around, that is exactly what Seattle did.  They played their best game of the series in the final game.  That was textbook Steve Konowalchuk T-birds hockey.  The Thunderbirds were unrelenting on the forecheck, they tipped the puck possession game back in their favor and forced Kelowna to play a 200 foot game all night.  Win or lose, ever since Konowalchuk arrived on the scene in 2011 that's how this team has played.  They are a direct reflection of their coach.

Goaltenders rarely steal an entire series for their team.  A game or two yes, but not a series.  But stealing a game can help you win a series.  In a playoff series with two evenly matched teams like this one between the T-birds and Rockets, Carl Stankowski did that for Seattle in Game 3 up in Kelowna.  The T-birds were outplayed that night but Stankowski came up with 34 saves, beaten only by a controversial goal that looked to be knocked in with a high stick.  He gave the T-birds a chance to win that game despite being back on their heels for most of sixty minutes and they did with a very late Keegan Kolesar goal.   If Kelowna gets that win, I'm not sure Seattle is going to the WHL Final for a second straight year.

To pick up the Western Conference Championship trophy or not?  Teams usually leave the conference championship trophy alone because that's not the ultimate piece of hardware they're after.  A year ago Seattle captain Jerret Smith honored that longtime tradition of not touching it, barely looking at it.  Seattle then lost to Brandon in five games in the league final.

This time around, the T-birds not only touched it, picked it up and raised it over their heads, they took selfies with it.  This team is different.  They've overcome adversity. Just when you think another, bigger obstacle has been laid in their path, they dig deeper and overcome it.   They bucked the trend of going deep in the postseason despite all the pitfalls they encountered.  Superstitions be damned.  They earned that trophy so they celebrated the moment.

Last season's team was a close knit group. Because of all the things they've gone through the past seven months, this year's team is even closer.  In Game 5 versus Kelowna, they played inspired hockey for their injured teammate Ethan Bear, and won 5-3.  In Game 6, they picked up Keegan Kolesar after he was sent off late in the first period with a five minute major and game misconduct.  When you are the next man up, when you play for the guy to the right of you and the guy to the left of you, there are no weak links.

Final power play chances from this series:  Rockets 42 T-birds 24.  Final power play goal totals:  Rockets 10 T-birds 8.  Seattle's penalty killers were terrific.  Another big reason why Seattle is moving on.  The turning point in Game 6 certainly had to be the T-birds, already down a goal, killing off that five minute major.  Kelowna didn't get even one shot on goal.  Momentum shifter.  Not long after killing that off Seattle tied the game, then scored twice more to take the lead for good.

When you play an important series such as this and a rookie defenseman logs a lot of ice but you don't notice him too much because he's going about his business the right way, that's a good thing.  Well done Reese Harsch.  In the absence of Bear, Harsch logged some big minutes on the penalty kill against that potent Rockets power play.  His slashing penalty late in the series clinching win may have actually saved a goal.

Kelowna rolled just four defense most of this series, primarily due to injury so I'm sure fatigue played a factor, but those are four really good d-men featuring a current NHL first rounder in Lucas Johansen, a future first rounder in Cal Foote and a 5th round NHL pick in Devonte Stephens.  Time and again though I saw Seattle's Sami Moilanen win puck battles from them deep in the Rockets end.  Some NHL team is going to get the steal of the draft should they pick Sami this June.

The last time Seattle and Regina played was six months and 76 games ago, October 30th at the Brandt Centre.  It was the second game on the T-birds six-game eastern road trip.  Seattle lost that night, 6-3, but that final score is misleading.  The game was tied, 3-3, midway through the third period when Regina scored on an Adam Brooks power play goal to take the lead, then added two late empty netters.  It was a special teams game that night.  The T-birds went 3-for-5 on the PP, the Pats 2-for-5.   The shots were even, 29-29.  The T-birds played that game with no Mat Barzal, who was still up in the NHL with the New York Islanders, and no Keegan Kolesar, still out with an injury suffered at NHL training camp with the Columbus Blue Jackets.  Also missing was  19 year old Layne Bensmiller, out with an injury that would eventually cost him the rest of the season.

Seattle's back end looked considerably different as well.  GM Russ Farwell had not yet made the trades that brought in Austin Strand and Aaron Hyman.

Six rookies dressed and five played in that game for the T-birds, including 17 year old Mackenzie Wight, who is no longer with the club, having been traded to Swift Current for Tyler Adams a month later. It was one of the few games in the early going where Wight wasn't a healthy scratch but he went into the lineup that night in place of another 17 year old rookie, Ian Briscoe.

The Seattle lineup also featured two defensemen in Bryan Allbee and Brandon Schuldhaus, who are no longer with the team and rookie Dillon Hamaliuk, who after six more games would be re-assigned to the AAA Midget Leduc Oil Kings.  The other rookies were defenseman Anthony Bishop and forwards  Luke Ormsby and Zack Andrusiak along with back up goalie Matt Berlin. A lot has changed, for both teams, in the ensuing six months.

My T-birds three stars for the Western Conference Championship:

Third Star:  C/W Donovan Neuls.  Neuls finished the series with five points (1g, 4a) and a +4 rating.  With the T-birds shorthanded 42 times in the series, he was one of their best penalty killers.  With Kolesar out most of Game 6 he stepped up to the top line as well as the top power play unit and earned a huge assist on the game winning goal.  Averaging well over a point per game in the postseason (1.29) on six goals, including two game winners, and 12 assists with a +8.  With all those penalties assessed to Seattle versus Kelowna, he stayed out of the box and so far hasn't picked up one penalty minute in the postseason.

2nd Star:  C Mat Barzal.  Barzal had a point in every game of the series versus Kelowna and is currently riding a 10-game point streak.  He hadn't scored a goal in the first five games against the Rockets but his goal in Game 6 was huge, giving Seattle a two goal cushion.  Like a season ago against Kelowna in the playoffs, he got better as the series moved along and was the best skater on the ice in Games 5 and 6.  After missing the first round of the postseason against Tri-City now has 17 points (5g, 12a) in 10 playoff games, averaging almost two points per game (1.70).

First Star:  G Carl Stankowski.  It takes a herculean effort to upstage Barzal but even Mat would probably agree Stanky was the series MVP.  He stole Game 3 in Kelowna with 34 saves.  While facing only 18 shots in Game 6, many of his stops were of the highlight reel variety.  While he gave up 17 goals in the six games, remember that in just four regular season games versus the Rockets, the T-birds other goalies surrendered 20 goals.  this was a Rockets team that led the Western Conference with 283 goals during the regular season and was scoring in bunches in the playoffs (38 in their first 11 postseason games).  When Seattle needed a big save, he delivered time and time again.