Anyone else notice that four of the five U.S. Division teams have lost their home openers? Only Spokane has a chance at breaking that streak after they started on the road and beat Tri-City in Kennewick Saturday night. Seattle won Friday in Portland, the Winterhawks returned the favor and beat Seattle last night at the ShoWare Center and Everett's home opener was spoiled by a 6-0 loss to Prince George. The Chiefs home opener, by the way, is next Saturday versus the Americans.

Prince Albert, Regina,Saskatoon, Red Deer, Vancouver and Kelowna also lost their home openers. If Spokane should lose their home opener that would mean half the teams in the WHL lost in their first game on home ice this season. What ever happened to home ice advantage?

I mention this because there is this unwritten rule of how a team goes about making the post season; win your home games and split on the road. It really works more for football, because they play so few games, but it is a good formula for hockey as well.

If the T-birds are going to be a playoff team next spring, they need to try and follow that formula. Unfortunately, over the past three years they have not been a good home team. They've not yet made the ShoWare a difficult place for opposing teams to come and play.

Last night they started out well but failed to play strong for sixty minutes. Their first two games have mirrored their play in the preseason. A solid period or two followed by a subpar period, or vice versa. They need to be more consistent.

Last night's game against Portland was a tight, low scoring contest over the first half. But after the melee and the ensuing long delay in front of the Portland bench at the 7:17 mark of the second period, the T-birds were a different team. There was no response from them. They stopped playing hard. And they got into some bad habits from years past. They got lazy with the puck on their stick in the defensive zone, stopped moving their feet and as a result turned the puck over far too many times.

Meanwhile Portland, which lost it's top player, Ty Rattie to a game misconduct, picked up the slack and took over the contest. Before Seattle got back to playing hard midway through the third period, the Winterhawks had scored five goals and broken open the tight 1-1 game. 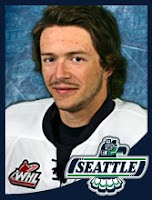 The one bright spot for Seattle last night? Another two point effort for Riley Sheen. Sheen, who scored two goals Friday down in Portland picked up an assist on each of Seattle's goals last night. This trade keeps getting better and better.

Here's hoping the trend of home teams losing their home opener continues as Seattle will be the opponent next Friday when Prince George opens up at the CN Centre.
Posted by In The Corners at 10:53 AM